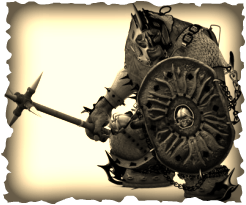 The World of Prime is a different approach to the D20 rule set. Rather than pretend that classes and levels represent the abstraction of skills and training, it accepts that classes are concrete and tangible. The powers gained by levels are supernatural. The wizard can warp reality with his mind; the cleric enjoys the intervention of his deity; and the warrior’s body is transformed into a nigh-indestructible engine of war.

The mechanism for obtaining these powers is tael, the physical component of the soul. Indestructible and invaluable, tael is harvested from the brains of sentient beings upon their death. Consuming this substance binds the soul to your cause. The more souls you acquire, the greater your power grows. And the more power you have, the more souls you can acquire…

Evil monsters roam the world, preying on the weak. Good kings collect the tael from their people’s natural deaths by old age, and spend the wealth defending the community. Greedy wizards use their magic to exploit the foolish while kindly clerics use theirs to help the less fortunate – or vice versa. Secrets are lost and uncovered, wars are fought and won, and empires rise and fall with the fortunes of their heroes.

Prime is the center of all things, the source of souls and the crossroads of the universe, and the stage for the Great Debate that will seal the fate of all planes of existence. From their private abodes, the gods plot and scheme, trying to win votes for their side by devotion or intimidation. The great Dragons, masters of the air, bow to no one; the dreaded Hjerne-spica lurk in their underground lairs, emerging only to lay waste to the surface in the terrible Black Harvest. In between the sky and earth, races and peoples from a thousand worlds – some natural, some altered, some pure creations of magic – live their ordinary lives.

The peasant toiling in the fields to fill his lord’s barns, knowing that his death will fuel his lord’s power, thinks little of all this pageantry. At least until terror wings through the sky, breathing fire, and heroes rise to the call with sword and spell. Gaping in wonder he watches; and so do his sons, quivering under a sheltering tree, and dreaming. Perhaps, one day, one of them will become the stuff of legends…